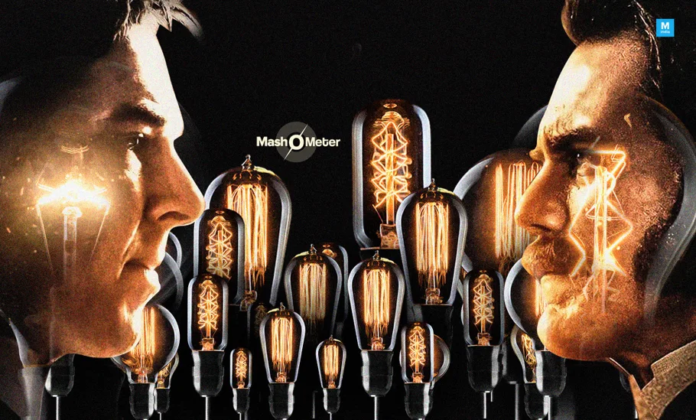 This article is part of our Mash’O’Meter review series, where Mashable India delves deep and obsessively into movies and shows. Sit back, grab a cuppa. This is going to be a long ride.

We, the people of Generation Z, have come to take electricity for granted. If you personally ask me, even the mention of current and power only reminds me of my electricity bill. It’s difficult to align with the time when this everyday utility must have been a breakthrough invention, almost magical. One cannot even begin to comprehend the odds and divisive politics that was once at play in the industrial age as fellow inventors had to outrun each other in order to be remembered by the eras to come. The Current War just taps into that very historical facet of scientific inventions, and the motivation of the faces behind them.

Alfonso Gomez-Rejon-directorial The Current War is a period drama that revolves around the cutthroat race between electricity titans Thomas Edison and George Westinghouse in the late 19th century, to determine whose electrical system would power modern America. Starring an ensemble superhero cast, Benedict Cumberbatch, Michael Shannon, Tom Holland and Nicholas Hault, it is a story about two principled and passionate men, with wildly different personalities, approaches and interpretations of the best means to electrify the country. As they pitch their groundbreaking ideas and compete for contracts across America’s grid, does their integrity stay intact?

The dark side of Edison in conflict with genteel Westinghouse values

It is 1880 and Thomas Edison (Benedict Cumberbatch), a cocky celebrity inventor, has just patented a glass tube that emits light. The whiz that he is at self-promotion, he puts on a show of an entire ground illuminated by a dozen of figments of his creation for a group of top-hatted businessmen at Menlo Park, New Jersey. He’s confidently braced to get a ruddy-nosed financier J.P. Morgan (Matthew Macfedyen) to give him a million dollars to secure his legacy and he won’t stop at anything!

Edison’s nemesis, George Westinghouse (Michael Shannon) is a civic-minded capitalist and a dynamo-magnate with admirable ethics. In a time when electricity was soon going to be a burgeoning industry, Edison’s pricier, less powerful direct current system is pitted against, Westinghouse’s cheaper and more fluid and edgy alternative current. Fueled by fame and the glory to win the race, Edison is hell-bent on turning his tide away and soon starts a misinformation media slander, labelling Westinghouse’s ways as lethal. In the midst of the bid to light up the Chicago World’s Fair, a soft-spoken Serbian immigrant Nicolas Tesla (Nicholas Hoult) also checks in with his futuristic designs and a maverick vision of tangible business success.

Mind you that the story is historically accurate, and it topples your respect for someone who’s arguably the greatest innovator of the 19th century. The narrative does not build Edison’s character into the sort of hero you would like to imagine. It does not shy away from portraying the circumstantial shift in his morale, which includes electrocuting animals to beat his opponent. Benedict carries the arrogance and pettiness skillfully, but his shaky American accent gives it away. Shannon, on the other hand, plays a likeable role – he’s decent, wealthy and a man of intellect in equal measures, directly in contrast with Edison’s character arc.

The hour and forty-five minute-long film follows a battle of technology. But you don’t need to mug up your science textbooks to be able to decode the intricacies of the verbal exchange happening here. Michael Mitnick’s script spares you of any ambiguous technical jargon that you’d expect to come across in The Current War. His attempt to add unpopular dimensions to the lives of the inventors can be felt, and is appreciable. There are tragic Civil War references, the invention of the electric chair and emotive Morse code communication to establish the bygone timeline.

However, none of these are relatable or convincing enough. The supposed biopic heavily compromises on the private lives of the legends, particularly their family life which is what makes it apparently cold. Albeit Edison loves his wife Mary (Tuppence Middleton) but he lacks regard for her wishes. Not to forget the miniscule screen-time that Middleton is assigned in the film. So even though the screenplay ushers you into the picture-perfect era, you feel disjointed with its people.

More emphasis on splendor than history itself

The Current War might be the most unconventional project in Alfonso Gomez-Rejon’s filmography. The film is packed with seamless CGI and undeniable splendor, whether it is the picturesque depiction of the world before it was rocked by electricity or props that look straight out of a Broadway musical. The film nails period finery but at some moments, feels like it is in a rush to make its point. Rejon has shunned any form of violence and has tried to make you look at a historically significant case through rose-tinted glasses, instead of getting candid with the rustic environment the 19th century is ought to be. Nevertheless, he manages to stimulate your visual senses with aesthetic frames whilst not moving you so much intellectually.

Some really abstract camerawork keeps you oddly hooked to every scene

Considering the film a historic drama with a dark, scientific undertone, it could be easily written off as a ‘dad’ movie. But a lot of cinematographic liberty has been taken to keep you engaged with the storyline. Production director Chung-hoon Chung has tried very hard to not make the film feel boring with a repertoire of abstract camerawork. He throws in Dutch angles, intense wide-lensed close-ups and experiments with canted angles to create visual interest and almost succeeds in it. At the same time, some dramatic circular pans and fisheye-lens shots, all seem tandem at certain points. To put it aptly, imagine Robert Yeoman’s style gone rogue. Then comes David Trachtenberg and Justin Krohn’s jerky cuts to further disorient you. Although, as a movie buff, I found the end result of it all very fascinating for a period film, it made me question the cinematic pulse the film runs a deficit on.

The purposefulness of the film lies in the overwrought Edison versus Westinghouse square, and hence it missed an opportunity to do more with a gem of a supporting cast. Nicholas Hoult as Nikola Tesla sits fairly well in the soggy narrative but obviously, gets eclipsed as the climax approaches which is exactly where Tesla’s reverence should have peaked. Edison’s character is not humanized enough, and it hampers his friendship with his secretary and ally Samuel Insull, played by Tom Holland. Nevertheless, the MCU stars deliver a satisfactory performance and do everything in their power to make their presence in their limited time on-screen.

As much as I liked The Current War in totality, I don’t think it’s going to flick everyone’s switches. It is visually lucid and distracting but that’s also the part I liked the most about it. As promised, it’s a compelling ode to Edison and his skills that earned him a prominent place in scientific literature and recognizes a largely forgotten inventor of the likes of Westinghouse. It’s a revisionist history, in an honest sense, which would make a great pick for debate in a business ethics class. Science buffs might find it a tad bit underwhelming and think of it as Wikipedia page come alive, but at least it’s a gorgeous and a coherent one at that.

Chris Salis: Facts about His Journey of Success and Accomplishments

Buying a new house? Here’s why you should get a pool...

Dr. Christopher Walker Discussed the Key Things Regarding the Working of...

What are the food allergy symptoms in dogs?

What activities are placed in breathwork sessions?