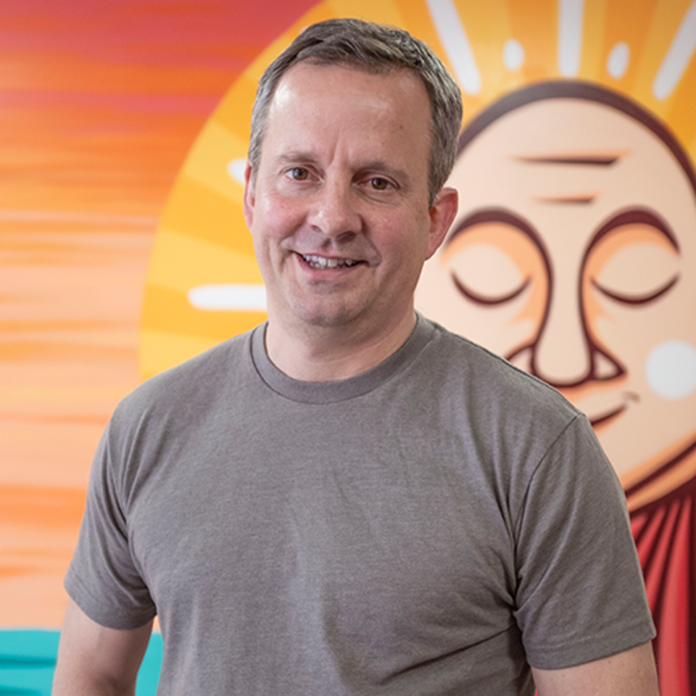 A quick pivot from successful bond trader to the owner of a struggling food brand might sound an unlikely move. But that’s precisely what Charles Coristine did when he left the trading world behind to become the CEO of LesserEvil Snacks.

Charles was simply burnt out after 18 years of working for major corporations like Morgan Stanley and TD Ameritrade. He knew he desperately needed a change. So, Charles took lessons learned from his deepening mindfulness practice and let the universe lead him.

Now, LesserEvil is a thriving, people-first company that produces only healthy, all-natural, always delicious treats—and it all started when Charles discovered a passion for mindfulness.

As a busy financial broker, busyness was his only constant and a decent night’s sleep merely a dream.  Today In: Small Business

“I would call into Tokyo and London a few times a night,” Charles remembers. “I had six computer screens in my house, and I was probably getting four hours of broken sleep for years.”

After a decade of grinding away, Charles needed new tools to feel less stress and more balance. Though he says exercise kept him from experiencing a nervous breakdown, it wasn’t enough anymore.

“I needed to find a way to find some calm or I’m going to go crazy,” thought Charles. At his wit’s end, he started digging into his spiritual side—a part of himself that had always intrigued him, but he never truly embraced.

“Ever since I was a child, there was always a natural curiosity,” Charles says. “It’s funny how it happens. Sometimes, it’s not until going through hard times that you take your spiritual game to a different level.”

“You’re looking for something deeper. You’re suffering from something that makes you want to push that envelope.”

During this search, Charles found a yoga retreat called Kripalu and signed up for a session in Hawaii. There, he met a Swami who fully introduced him to the practice of mindfulness and meditation. He was amazed at how quickly the practice lessened his stress and rejuvenated his mind and body.

Soon, his new passion for mindfulness and mental wellness began inching its way into nearly every facet of his life—including the way he ate. Now acutely in tune with how his body felt after a meal, Charles transformed his diet and embraced natural, holistic food.

Little did Charles know this nutritional pivot would soon change his life’s direction.

Even with meditation, Charles’ current career often left him exhausted. He still loved the constant energy of this adrenaline-packed industry. But, he was reaching his 40s, and it was getting continually harder to keep up with the nonstop lifestyle of a broker.

“As fun and exhilarating as it was, it took it out of me,” says Charles. “You started seeing the writing on the wall that this couldn’t last forever.”

That’s when a friend told him about a natural food brand called LesserEvil Snacks, with owners who were desperate to sell.

First launched during the low-carb Atkins boom, and primarily funded by actor Gene Hackman and Mad Money’s Jim Cramer, LesserEvil was struggling to find its footing after Atkins began to bust.

Charles wasn’t necessarily in the market to buy a business—not to mention he had zero experience in the food industry. Still, he saw promise in its premise. As Charles’ mindfulness practice had evolved into him living a health-conscious lifestyle, he thought, “Oh, maybe this is where I’m meant to be.”

“So, I decided to take the plunge.”

His primary goal was to refine LesserEvil’s mission. Initially, the company’s concept was fairly literal to its name. Their current snack offerings weren’t really healthy. They just weren’t as terrible as mainstream treats like Doritos or Cheetos.

He also had to find those products fast because things were already looking bleak for LesserEvil.

“I inherited a business that was worse than anticipated,” Charles says. Within his first year of ownership, several of the top chains LesserEvil partnered with pulled out of their contracts. This resulted in a loss of about 60% of sales.

In response, he took the advice he learned back in finance. “If there’s one thing I took out of trading, it was that if something’s not going well, you get out,” says Charles. “It was all black and white. There was no grey.”

Rather than dump his new brand, Charles dumped the product lines that weren’t selling. He then purchased a new facility space where his team could test out new recipes. Here, Charles began fostering a culture of play.

As Charles and his team experimented, he actively encouraged creativity and discouraged any feelings of failure.

“We need to stop taking ourselves so seriously,” Charles says. “Just slow down a bit, and don’t try to hit home runs right out of the gate.” Instead, he encouraged his team to keep innovating, collaborating, and creating until the perfect product has been realized.

Today, LesserEvil’s snacks can be found in stores like Whole Foods and Natural Grocers, as well as online marketplaces like Amazon, Thrive Market and Vitacost. They’re also using their success to promote sustainability and accessibility.

For LesserEvil, it’s not just about making better snack foods. They also want to create a better world for all.

A Culture of Play & Positivity

It’s a mission he’s sticking to not just for his customers, but the people at his company as well.

First off, he doesn’t want his culture of play to end on the product development line. He wants it to extend well into the LesserEvil headquarters in Connecticut. Of course, he’s serious about distributing tasty, healthy snacks to people worldwide—but can’t that also be fun?!

“When people aren’t afraid to play, you get the best from them,” says Charles. His team thrives on playing together outside of the office including CrossFit classes, athletic events, and even dance parties.

He also fosters this same sense of camaraderie and openness within the office. Charles wants every member of his leadership team to listen from a place of empathy and open up real, human conversations—no matter the potential issue.

He attributes this mentality to creating a culture of trust and authentic communication. “They feel like they’ve been heard,” says Charles. “It’s a game-changer.”

Want to hear my entire conversation with Charles Coristine? You’ll learn more about his journey into mindfulness, what advice he has for aspiring entrepreneurs, how he’s found success while staying true to his values, and so much more. Listen to the entire conversation on my donothing podcast.

We are Trying to Build the Greatest Canadian Success Story in History: BenchSci CEO