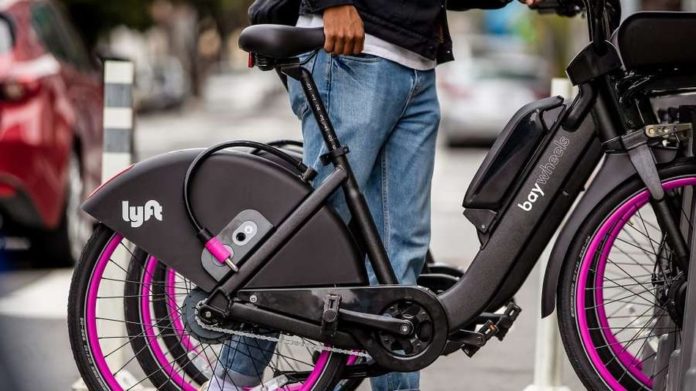 A Lyft electric bicycle was spotted smoldering in San Francisco on Wednesday.

Lyft’s new bike-sharing system in the Bay Area, dubbed Bay Wheels, includes black-and-pink electric-assist bicycles powered by a battery on the bike’s frame. These units used to be part of bike-sharing program Ford GoBike, similar to New York City’s Citi Bike. Now, it appears some are becoming a bit too hot to handle.

The San Francisco Examiner reported on Wednesday that a passerby saw flames coming from a bike parked in an official Bay Wheels dock in the Lower Haight area around noon. Apparently a separate Lyft e-bike caught fire over the weekend, also in San Francisco, with the fire emanating from its battery.

Last week a Lyft e-bike with a burning battery was reported on the UC Berkeley campus, across the bay from San Francisco.

“Out of an abundance of caution, we are temporarily making the e-bike fleet unavailable to riders while we investigate and update our battery technology,” said a Lyft spokesperson in an emailed statement.

SEE ALSO: Lyft’s bike-share in the San Francisco area has a whole new name — and look

Before the new branding and e-bikes were unveiled, Motivate’s bike-sharing fleets (Lyft acquired Motivate and its bicycles last year) had a braking problem and the old e-bikes had been pulled off the streets at three cities across the U.S. The new Bay Wheels bikes finally replaced those bikes, which had been unavailable since April.

The Most Important IPO for Silicon Valley in 2019 Comes from...