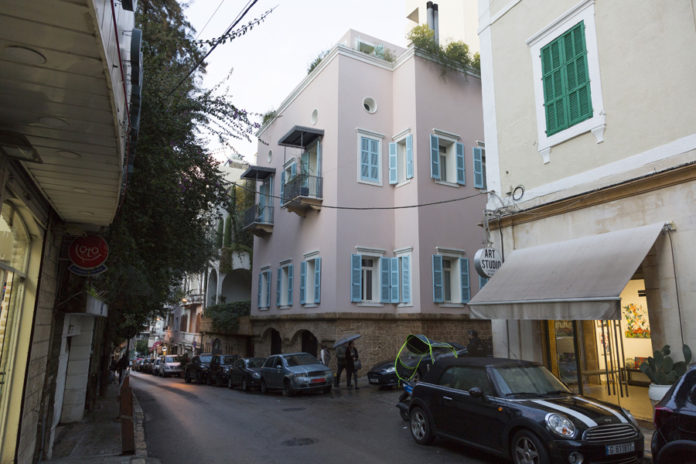 People walk past the pink residence of former chief of the Nissan-Renault auto alliance, Carlos Ghosn, in Beirut, Lebanon on Saturday, Jan. 4, 2020. Ghosn, who is facing charges of financial wrongdoing in Japan, fled to Beirut, where he has a home and faces no extradition to Japan. (Dalia Khamissy/The New York Times)

A team of operatives working to help Carlos Ghosn escape from Japan spent hundreds of thousands of dollars scoping out airports and other entry points in Indonesia, the Philippines, South Korea, Taiwan and Thailand before his flight last week, a person with knowledge of the matter said.

The goal was to find security flaws that would allow Ghosn to evade authorities, this person said. Ultimately, the planning team flew him from Japan to Turkey and then on to Lebanon. Ghosn has a home in Beirut and faces no extradition to Japan; he is also a citizen of France, where he has spent most of his adult life.

The preparation for his escape, remarkable in its scope, was conducted under a veil of secrecy: Even some of the project’s operatives did not know the client’s identity or when the escape would take place, said the person, who spoke on the condition of anonymity because of the legal sensitivity of the issue.

Ghosn, the former head of the Nissan-Renault-Mitsubishi alliance, is facing charges of financial misconduct in Japan and was free on bail. He left his home in central Tokyo on Dec. 29, in an escape that the authorities are piecing together, fleeing what he called a “rigged Japanese justice system.”

Details of his trip are beginning to come to light. That afternoon, Ghosn walked about 900 yards to a hotel, where he met two men, according to NHK and Nikkei, which cited sources in the city prosecutor’s office and the Tokyo police.

The three then went to the Shinagawa railroad station, a major hub, and a little after 4:30 p.m. boarded a Shinkansen, or high-speed bullet train, for Osaka, about 340 miles southwest of the capital, the reports said.

It’s unclear if Ghosn, who is one of the most recognizable public figures in Japan, hid his appearance. Once in Osaka, the three men entered a hotel near Kansai International Airport about 8 p.m. A couple of hours later, the two men left the hotel with two large boxes; Ghosn was not in sight, the reports said. They boarded a corporate jet with the boxes, and flew to Istanbul.

News reports have said that Ghosn evaded airport security measures by hiding in a box that was loaded on the plane.

From Istanbul, Ghosn reportedly got on a smaller plane, and arrived in Beirut later Monday.

Lebanese officials have said he entered legally with a French passport and a Lebanese ID, so there was no reason to stop him at the border. But on Monday, France’s foreign minister, Jean-Yves Le Drian, suggested that might not have been the case.

“As far as we know, he did not use French documents,” he told BFM TV.

The French finance minister, Bruno Le Maire, appeared to harden the government’s stance on Ghosn, saying Monday that the executive should face justice in a court of law.

“When one is a defendant, one does not escape justice,” he told France Inter radio. “And Carlos Ghosn is a defendant like any other.”

Le Maire added that the French government was ready to open an investigation into $11 million in questionable expenses at the headquarters of the alliance between Renault, Nissan and Mitsubishi Motors while Ghosn headed the group. The expenses were identified in June during an internal audit carried out by Nissan and Renault, an alliance in which the French government holds a 15% stake.

Ghosn has long denied the allegations of financial wrongdoing and insisted he had been set up by Nissan executives who were worried that he would further merge the operations of the Japanese automaker and Renault of France.

Ghosn’s escape was an embarrassment for the Japanese authorities, who Monday promised to tighten airport baggage inspections and the rules governing the release of criminal suspects on bail.

“Now, measures have been taken so that similar acts can’t be committed,” Masako Mori, Japan’s justice minister, said at a news conference. Though her ministry is not responsible for baggage inspection, she said, different agencies are working to tighten control.

Mori also said the government would accelerate an existing review of Japan’s bail policies, including whether to require defendants to wear tracking wrist or ankle bracelets. Ghosn offered to wear one when he sought bail, but the court granted it without that requirement.

She added that Ghosn’s bail had been canceled. In leaving Japan, he forfeited 1.5 billion yen ($13.9 million).

Ghosn is expected to meet with reporters this week. On Monday, a host on the Fox Business Network, Maria Bartiromo, said that she had spoken to Ghosn over the weekend and that he said he would present evidence that the criminal counts against him were an effort by Nissan and Japanese officials to prevent a merger with Renault — a charge he has made before.

Mori defended the country’s justice system as fair and open, with plenty of opportunities for Ghosn to defend himself.

“We acknowledge that there are various criticisms of Japan’s criminal justice procedures, but every country has a different criminal justice system,” she said. “It isn’t appropriate to simply focus on one part of the system when comparing it to other countries.”

Aircraft Fuel is Notoriously Dirty. This Airline is Betting on Clean Electricity.

Tips for Startups On Working with Larger Corporations by Anmol Seth

“This is not the bat’s fault”: A Disease Expert Explains Where the Coronavirus Likely...