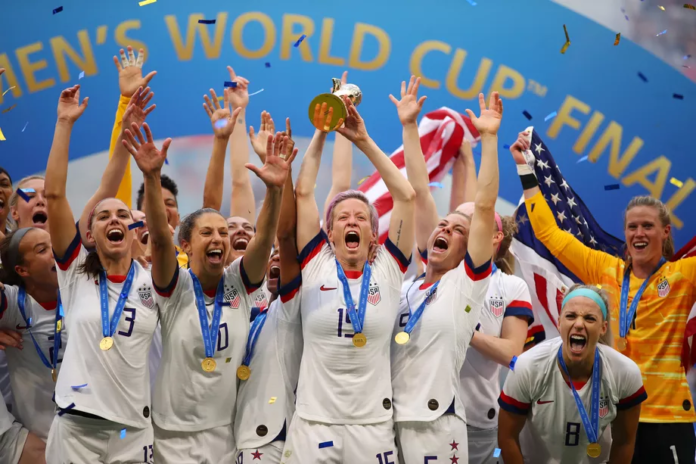 The United States beat the Netherlands in the 2019 Women’s World Cup on Sunday 2-0, following a month-long tournament that attracted more attention to the sport — and to social issues surrounding the women’s league — than ever before.

The 8th Women’s World Cup, which kicked off on June 7, culminated Sunday evening at Parc Olympique Lyonnais, in France, and resulted in a hard-fought fourth world championship for the US team.

From the outset of the tournament, the US team was favored to win. In their first match against Thailand, they won 13-0, scoring, as some have pointed out, more goals in one game than the men’s team has scored in every World Cup since 2006 combined.

So going into the final game today, Holland was the underdog, despite having won the UEFA European Women’s Championship two years ago. They staved off goal attempts until minute 61, when US team captain Megan Rapinoe sunk a penalty kick to the right of the box.

The purple-haired Rapinoe has drawn attention throughout the tournament for her outspoken political views, but also for her standout playing: this was her sixth goal of the Cup, tying her with teammate Alex Morgan for most goals in the tournament.

Eight minutes later, midfielder Rose Lavelle scored the second goal of the match — and ultimately, the Netherlands never caught up, failing to score a goal despite a number of attempts. When the final whistle blew, the US was crowned world champion for the second time in four years.

This was the Women’s Cup’s most popular tournament ever. The opening match, semi-finals and final match all sold out within 48 hours, and an estimated billion people tuned in for matches.

The US is a dominant team on the world stage, and The New York Times’ Rory Smith described an “American Invasion in Lyon,” where fans decked out in stars and stripes helped give the US players a sense of home-court advantage.

And famous fans tweeted their support in advance of the final match:

After the game ended, the New York Times described free-flowing tears as the US team “cemented their status as the gold standard in women’s soccer.”

“It’s surreal,” Rapinoe said at the game’s finish. “I don’t know how to feel. It’s ridiculous.”

The World Cup drew extra attention this year not just for the excellence of the US team, but for the myriad social and political issues that their participation raised.

In late June, Megan Rapinoe, the team’s captain, snorted in response to a question about visiting the White House to celebrate if her team won the tournament.

“I’m not going to the fucking White House,” she told the reporter in a video published by Eight by Eight that soon went viral — and that attracted the ire of President Trump.

“I am a big fan of the American Team, and Women’s Soccer, but Megan should WIN first before she TALKS! Finish the job!” he tweeted, before extending an invitation, win or lose, to the entire women’s team.

In response, Rep. Alexandria Ocasio-Cortez’s (D-NY) invited Rapinoe and the rest of her team for a tour of the House of Representatives “anytime they’d like.” Rapinoe accepted the invitation.

Rep. Ayanna Pressley (D-MA) followed up, saying she’d bring a red velvet cake to the celebration, slyly mocking the fast food that President Trump served to the Clemson Tigers to celebrate their national college football championship in January. And Democratic presidential candidate Sen. Kamala Harris (D-CA) added an invitation of her own.

Rapinoe doubled down on her opposition to attending any kind of White House celebration following the release of the viral video, saying in a press conference: “I would encourage my teammates to think hard about lending that platform or having that co-opted by an administration that doesn’t feel the same way and fight for the same things we fight for.”

According to Vox’s Gabriela Resto-Montero, this statement was of a part with Rapinoe’s ongoing activism, which has also ruffled feathers within the US Soccer Federation:

The success of the US women’s team, which is ranked first in the world according to FIFA, the sport’s world governing body, has also drawn attention to pay disparity between male and female players.

The US men’s team is currently ranked 30th in the world, according to the same FIFA rankings, but those players earn more when they lose than players on the women’s team earn when it wins, as Vox’s Tara Golshan has reported:

In response to this pay disparity, 28 members of the women’s national team — including Rapinoe — have sued the US Soccer Federation for gender discrimination.

That suit, which was filed on March 8 to coincide with International Women’s Day, alleges that the national governing body has discriminated against the women’s team on a variety of issues beyond the wage gap, including medical benefits, travel, and training conditions.

Molly Levinson, a spokeswoman for the players who filed the lawsuit, said that the men and women’s teams “face drastically unequal conditions and pay under their shared employer,” in violation of the Equal Pay Act and Title VII of the Civil Rights Act, which prohibits gender-based employment discrimination.

She added: “Even as the most decorated American soccer team in history, USSF treats the women’s team as `less-than’ equal compared to their male colleagues.”

US fans in France showed their support for the fight by chanting, “Equal pay” ahead of games, and they renewed the call when FIFA president Gianni Infantino took to the field to congratulate the team following the final.

While the two sides were originally scheduled to debate the matter in court, the women’s national team and US Soccer have agreed to try to close the pay gap through mediation. Now that the women have the World Cup in their possession, that mediation process will begin.

US hospitals are Struggling to Respond to the Covid-19 Pandemic