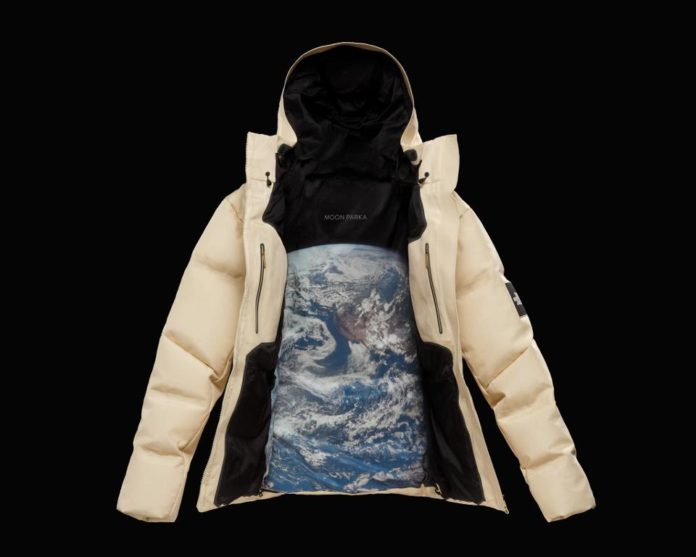 Spider silk may be the holy grail of biomaterials. In nature, it can be tougher than Kevlar, lighter than carbon fiber, and warmer than the densest down, depending on how it’s made. Today, Japanese biomaterial company Spiber announced the world’s first outerwear jacket made with spider silk.

But instead of spiders producing its silk, precision-engineered microbes make it.

Spiber unveiled the jacket at a press conference in Tokyo with apparel company The North Face Japan. The high-performance ski jacket, called Moon Parka, will hit shelves for a limited release on December 12, 2019.

While this jacket isn’t designed to deflect bullets, the Moon Parka definitely lives up to its name: it’s made with the same kind of performance biomaterials that might one day sheathe astronauts living on a lunar base. This year also marks the 50th anniversary of humans walking on the moon. Today In: Business

The textile used in the jacket is waterproof and breathable, and it uses a high-performance filler that makes it very warm. But what makes this parka really special is that its biological fabric was produced through a renewable process that meets demanding The North Face performance requirements, which would usually require non-natural, petroleum-based materials to achieve. You wouldn’t even try to make this jacket with natural wool or silk.

The parka fabric is one example of “grown materials,” which are receiving increasing attention as potential replacements for petroleum-based fabrics like polyester and nylon. Spiber uses synthetic biology — a scientific field that leverages DNA editing techniques to program microorganisms — to quite literally grow their silk-based materials. In this case, engineered bacteria are fed sugar, which during fermentation produces the silk-like proteins that Spiber calls Brewed Protein. The proteins are then purified, spun into threads, and woven into fabrics.

The production of the Moon Parka is also built with sustainability in mind from the outset; the microbes can be fed sugar from agricultural waste products. And since the coat is made almost entirely of protein, it is inherently biodegradable.

The Moon Parka’s release falls in line with Spiber’s ongoing plans to scale synthetic protein production. At the end of last year, they announced the construction of a new production facility in Thailand on the back of a $44 million investment. Once completed around 2021, the new facility is expected to be the world’s largest structural protein fermentation facility, supplying more than enough raw material to produce several thousand jackets each year.

This uptick in production capacity comes, in part, because the global demand for designer biomaterials is growing; researchers can now engineer incredible control over a material’s mechanical properties at a molecular level. Fabrics derived from synthetic biology also offer sustainability at a time when a shift away from petroleum-based goods is desperately needed. Most outdoor jackets are made using nylon or polyester, both of which are non-biodegradable, derived from petrochemicals, and pollute waterways.

This jacket is not Spiber’s first fashion statement, either. They have already manufactured dozens of different garments using similar approaches – just not at scale.

Last fall, renowned Japanese designer Yuima Nakazato featured bioengineered fabrics from Spiber at Paris Fashion Week. The lineup, called BIRTH (perhaps giving a nod to the future of the fashion industry?), was made almost entirely from engineered bacteria. The collection featured bold silhouettes and playful knits in muted earthen tones inspired by nature. Every piece in the collection lends credence to the power and versatility of molecular designs and the promise of synthetic biology.

Now, Spiber is taking its bioengineered materials to the next level. The Moon Parkamarks a paradigm shift in synthetic biology and the fashion industry, where sustainability and high-performance are no longer “buzz words,” but the method of choice. Sustainable, designer biomaterials are of superior quality and soon, for the first time, they will be available in stores — and seen on the ski slopes.

Acknowledgment: Thank you to Nicholas McCarty for additional research and reporting in this post. Niko is a Bioengineering PhD student at the California Institute of Technology. He previously completed his Masters in Systems and Synthetic Biology at Imperial College London as a Fulbright Scholar.

Will PSA Group Accept Defeat And Leave FCA To Merge With Renault?