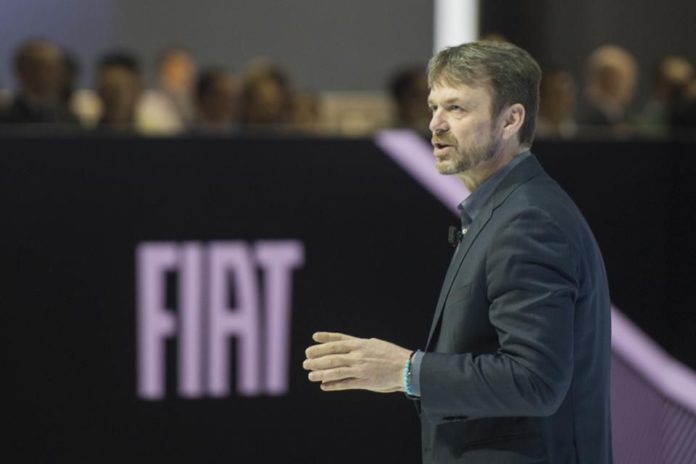 Fiat Chrysler Automobiles (FCA) share price zoomed ahead more than 12% to 12.90 euros after news it proposes a merger with Renault of France, and possibly as investors anticipated a tastier proposal from PSA Group.

After FCA CEO Mike Manley said earlier this year that the company would be open to deals which enhanced its prospects, investors had been expecting merger or takeover action. The favorite candidate had been PSA Group, also from France, which successfully bought General Motors’ chronic loss making European subsidiaries Opel and Vauxhall and pointed them on the road to profitability.

FCA proposed a merger with Renault Monday which would be 50% owned by FCA and 50% Renault. Renault said it would consider the proposal at a board meeting today. The French state owns about 15% of Renault.

Combining Renault and FCA would produce a company with annual output of about 9 million vehicles, and rank third behind Volkswagen and Toyota. Including Renault alliance partners Nissan and Mitsubishi the combined output would reach close to 15 million and into number one spot.

The Renault alliance with Nissan is potential complicating factor because it has been under pressure recently, not least because Japanese authorities arrested former CEO Carlos Ghosn on corruption charges, which he denies. The alliance was already creaking because the Japanese felt they had less influence than their contribution demanded. Nissan was close to bankruptcy when Renault stepped in to save it, but has since become much more profitable than the French company.

Investment bank Nord-LB of Hanover, Germany had expected any deal involving FCA to involve PSA, and wondered if the alliance with Nissan might be a complication too far.

“The merger proposal from FCA already sounds very concrete, and it is hardly conceivable that the management of Renault was not involved in advance. However, Renault currently has its hands full with its alliance partner Nissan, and it is unthinkable that this partnership would be abandoned,” Nord-LB analyst Frank Schwope said.

“Adding FCA to the global Alliance – Renault + Nissan + Mitsubishi – would add considerable scale, and if it can be achieved without complicated cross shareholding stakes, a point of frustration for both Renault and Nissan shareholders, we’d expect this to be earnings accretive,” Gupta-Chaudhary said.

Investment researcher Jefferies liked the look of the deal too, and wondered if PSA might step in.

“FCA fits as well with Renault as it does with PSA; governance control, management structure are key considerations,” Jefferies analyst Philippe Houchois said.

Houchois said if Nissan and Renault fail to agree agreeable terms and the alliance fails, FCA would be an effective substitute.

Nord-LB’s Schwope said not only did the merger make very good sense, the reaction from investors meant that it was a good time to cash in Renault shares.

“In view of the high investment costs for future technologies such as autonomous driving and electromobility, a merger or close cooperation between FCA and Renault makes perfect sense. As a result of the merger euphoria, Renault shares rose by around 13% to 56.63 euros this morning. We recommend that you use this price increase to exit the Renault share and sell it,” Schwope said.

If PSA fails to acquire FCA, it might well turn to buying ailing British-based and Tata Motors of India owned-Jaguar Land Rover.

There had been rumors that a Chinese automaker might be interested in FCA. Some analysts wondered why Renault would want to merge with FCA because it was losing money in Europe currently, U.S. margins are falling, and huge investments are required to meet tough environmental regulations in Europe. Last month FCA said it will pay Tesla close to 2 billion euros ($2.2 billion) for credits to help it make its E.U. emissions targets in 2020.

How Coronavirus is changing the ways we grieve and mourn the...