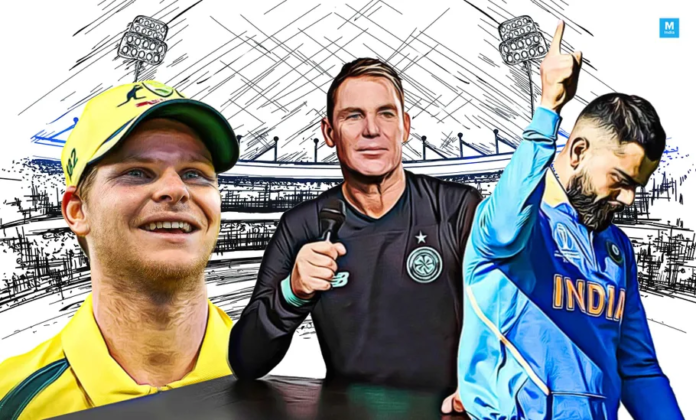 Virat Kohli and Steve Smith recently made headlines for the records that they had broken. Kohli recently became India’s most successful Test captain after India’s win against the West Indies. It marked his 28th win off 48 games. On the other hand, Steve Smith overtook Virat Kohli as the best batman in test cricket with 6577 runs. So, that naturally brought up the question that who is better? And Shane Warne came forward to answer it.

According to Hindustan Times, Warne said,

“As far as Test cricket goes, I would probably say it is a really tough one between Virat and Smith. But I think if I had to pick one batsman in Test cricket, it would be Smith, but if I lost that and had Virat, I would still be happy because he is a legend. I think Virat is the best batsman in the world. I think if I had to pick one batsman across all formats, it would have to be Virat. Viv Richards was the greatest batsman I saw in ODI cricket and in all cricket probably. But Virat is now the greatest ODI player that we have seen. He overtakes Viv for me.”

“I think he will break all records and I am a big fan of how he goes about his job and I have said that publicly as well. I think Virat in all forms of the game is the best batsman in the world”

“I think he is a wonderful leader. You are never the best version of yourself when you first start as captain and it generally takes a bit of time. I think he is growing into the role. I think maybe he was a little bit too emotional when he took over, but I love his passion and I think he is starting to get the balance between emotion, passion and being calm. I think he is also getting better tactically.”

In addition to all that, he thanked Kohli for keeping the hype around Test cricket alive,

We tend to think that comparing people isn’t good. But in this case it looks like a healthy way to keep upping the stakes because if somebody isn’t labelled the best, nobody will have the urge to take their place. So, congratulations Steve and Virat. Keep fighting so that the spirit of the game of cricket continues to burn brightly.

H1-B Alternatives: What Are the Available Visa Options

Looking to buy spare parts for your car online? Here is...

What To Consider When Choosing a Truck Driving Program