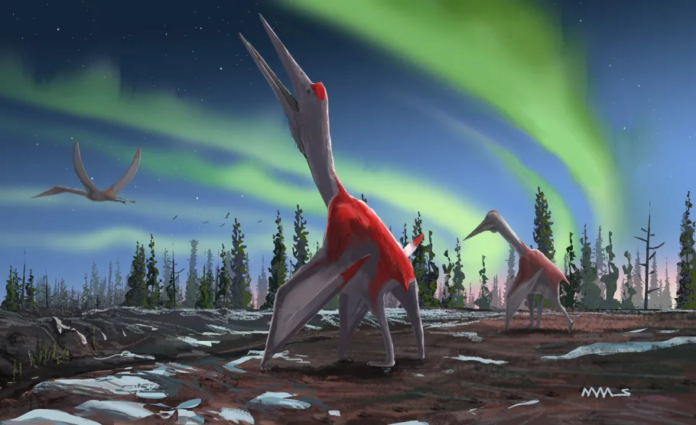 Palaeontologists thought they had found the remains of Quetzalcoatlus, an already known species of pterosaur first discovered in Texas, United States when they came across the skeleton of a completely new species they uncovered in Alberta, Canada, which is now being regarded as one among the largest flying animals to have ever existed on the face of Earth.

SEE ALSO: Paleontologists Have Discovered A New Species Of ‘Lethargic’ Dinosaurs In Japan

With a wingspan of a whopping 10 metres, scientists discovered the remains of Cyrodrakon boreas, a reptile that hails from the Azhdarchid group of pterosaurs. This flying reptile which lived during the Cretaceous period, around 77 million years ago, is the first ever pterosaur to be found in Canada. Lead author David Hone published the study in the Journal of Vertebrate Paleontology, thinks it’s a ‘cool discovery’ as now, they can show the animal to other azhdarchids and so, it gets a name as it already known, reports The Hindu.

Going by the skeletal remains discovered at the Canadian site, Cyrodrakon boreas stands for growing understanding in the azhdarchid diversity. The main skeleton found consisted of a part of its wings, legs, ribs, and neck that belonged to a young animal with a wingspan of about five metres.

But, one giant neck bone from another specimen, according to the researchers, suggests an adult animal would have a wingspan of around 10 metres. Researchers speculate that these were carnivorous animals weighing 250 kilograms each and preyed on small animals like lizards, mammals and even baby dinosaurs.

But contrary to popular belief about pterosaurs, the azhdarchids lived in a terrestrial setting, despite their likely capacity to cross oceanic distances in flight and thus adapted to inland environments. And although they were giant animals, few azhdarchids were scattered across North and South America, Asia, Africa and Europe and hence, scientists only have figments of their remains. This makes Cyrodrakon particularly a very important animal, going by the palaentological findings, as it has been found in well-preserved bones of different sizes, indicating multiple individuals.

Looking for managed IT solution? Here is the solution

Find the best property in Singapore.

5 Ways To Safely Dispose Off Sharps

Rodney Diggs: A Skilled and Dedicated Lawyer in California

Why Windows Are The Essential Part Of Home Improvement

Why It Is Important To Hire The Best Criminal Defense Attorney?