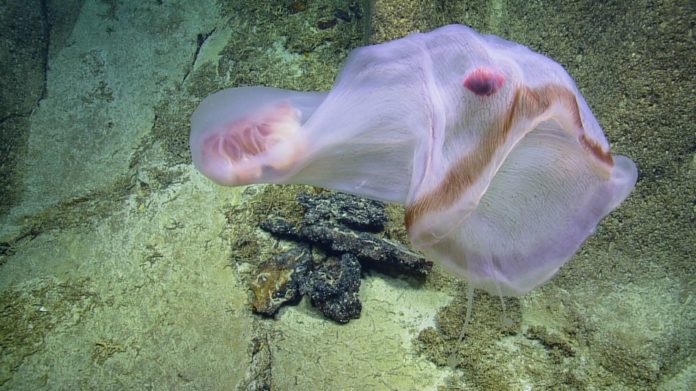 And scientists just captured one on film. At some 2,590 feet beneath the surface in the remote Pacific Ocean, an exploration mission undertaken by the Ocean Exploration Trust recorded a known, but remarkably strange, jellyfish transforming in front of their remotely operated robotic vehicle.

It’s a Deepstaria jellyfish, a creature that’s capable of expanding and changing shape. The conversion from a Pac-Man-like critter to a long, amorphous blob begins at about 40 seconds into the video below.

The Deepstaria, however strange, is an expected sight in the deep ocean. Marine scientists know that profoundly weird life lives in the planet’s largely unexplored seas.

But it gets weirder.

A vivid red isopod, a segmented crustacean, is seen inhabiting the inside of the Deepstaria. The isopod isn’t prey, but “it is likely that this small crustacean consumes pieces of jelly while remaining hidden from predators,” the Ocean Exploration Trust notes online.

SEE ALSO: Why we need an underwater space race

The goal is to document the natural environments in these deep seas and the creatures therein. Among whatever else dwells in these depths, there are shapeshifters.

Ten interesting things that we read this week

How Cyber Security Can Enhance the Security against Threats