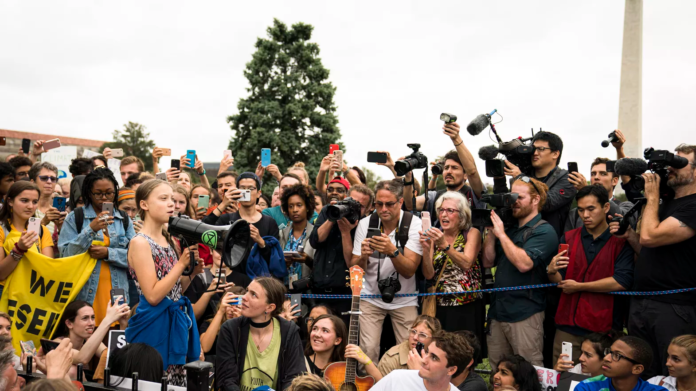 In a packed room on Capitol Hill Tuesday afternoon, Senate Democrats were fawning over a group of youth climate activists, showering them with praise. “We need your leadership. Young people are the army,” Sen. Ed Markey (D-MA), a co-author of the Green New Deal resolution, told them. “You put a spotlight on this issue in a way there has never been before.”

But Greta Thunberg, the most famous activist of them all, wasn’t having any of it.

“Please save your praise, we don’t want it,” said Thunberg, the 16-year-old Swede who has become the most recognizableand influential face of the youth climate movement. “Don’t invite us here to tell us how inspiring we are without doing anything about it. We don’t want to be invited to these kinds of meetings because, honestly, they don’t lead to anything.”

Thunberg, who has made a habit of reprimanding adults in power on their climate complacency, has learned that the frustration, impatience, and fear of young people for the catastrophic future is a powerful tool. And she used it on Democratic members of the Senate Climate Change Task Force.

“We don’t want to become politicians, we don’t want to run for office,” she said. “We want you to unite behind the science. I’m sorry, I know you’re probably trying very hard, and this is not personally to any one of you but generally to everyone. I know you’re trying, but just not hard enough.”

Asked what their timetable was for passing climate legislation, the senators didn’t have many answers. Of course, as Markey told Thunberg and others, Democrats don’t have a lot of say right now because they don’t have a majority in the US Senate and don’t control the White House. And President Donald Trump is a climate denier who is trying to pull the US out of the Paris climate agreement.

The meeting ultimately revealed a riveting dynamic playing out right now in climate politics: With their hands tied by Republicans in power, the adults are looking to youth activists to create pressure. Meanwhile, the youth are saying to everyone in power, you need to do much, much more at every level of government.

Thunberg has pressured European politicians successfully. Can she do the same thing here?

If putting extreme pressure on politicians is the modus operandi of the youth climate movement, Greta Thunberg is a master of it.

Thunberg’s superpower appears to be shaming adults. The teenager’s direct, stern rhetoric in the US Senate Tuesday is similar to what she’s told politicians in Europe. Thunberg, who has Asperger’s, has calmly been excoriating the most powerful people in Europe, in settings ranging from British Parliament, to the UN Climate Change COP24 Conference, to the World Economic Forum in Davos, Switzerland.

She has gotten results in Europe as well, as New York Magazine’s David Wallace-Wells wrote:

In February, the president of the European Commission committed to spending fully a quarter of the E.U. budget on climate mitigation over seven years, following a meeting with her. And shortly after she visited the British Parliament, its Conservative majority voted to declare a climate emergency, then promised it would zero out on its carbon emissions by 2050 (and this amid the long, consuming drama of Brexit).

Now, Thunberg is trying to do the same thing in the US, during a complicated time for the country on climate. On the one hand, President Trump announced he would pull the country out of the Paris climate agreement shortly after taking office, and his administration has gone about replacing former President Barack Obama’s Clean Power Plan with one that will cause US carbon emissions to rise.

At the same time, youth are infusing the climate movement in the US (and beyond) with more energy than it’s had in decades. Activists from Sunriseare putting new pressure on Democrats to pass sweeping climate change legislation if they can take back the Senate and White House in 2020. This Friday, thousands of young people across the globe will walk out of their jobs and schools to bring attention to climate change, and call on politicians to act.

Thunberg, who will lead the Global Climate Strikes on September 20 and 27, arrived in New York in late August, after making the trek across the ocean on a zero-emissions sailboatas a way to forgo air travel. She’s on Capitol Hill on Tuesday and Wednesday to meet with politicians including Senate Minority Leader Chuck Schumer, and will give a speech in front of Congress on Wednesday.

She’s being joined by her American counterparts in youth climate activism. Groups like the Sunrise Movement are growing in prominence and becoming a force to be reckon with in American politics. Through protests and direct action, Sunrise is trying to force the hand of US politicians on climate. With Trump in the White House, they’re pinning their hopes on the 2020 presidential elections.

As Sen. Ed Markey told Thunberg, Democrats in Congress can’t currently take much meaningful action; Senate Majority Leader Mitch McConnell has vowed to oppose a Green New Deal, a resolution of principles to guide the US to carbon neutrality by 2030, turning the country into a global leader of renewable energy.

“We have to live with the fact we lost the election in 2016 to Donald Trump, that we don’t control the US Senate,” Markey said. “We have to flip the Senate, hold onto the House, and get rid of Donald Trump. In January 2021, you will see a cascade of legislation.”

If Thunberg’s visit was any indication, Markey and Senate Democrats will likely face intense questioning from activists on what that legislation will look like — and whether they have a specific plan for how to get it done.

Want to live a dynamic and quality life in Calgary? Here’s the solution

What Signage is Best for Your Business

The Ultimate Legacy of a Passionate IT Professional: Deepak Kharbanda

Answers to All Your Questions About Teeth Staining

Tips for Start-ups to Successfully Start Businesses with Boosted Performance

How Water Dispensers Are Beneficial