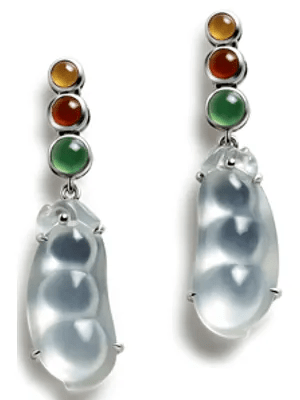 Jewellery associated with the Chinese culture is synonymous with Jade. Carvings made from jade have been the most highly regarded throughout Chinese history and have been dated as far back as the Neolithic era where it was believed to have spiritual and magical qualities. For thousands of years Jade has adorned the most powerful Chinese as a symbol of their moral integrity, and accompanied them in the afterlife to comfort their souls. With this unusual and prolonged interest in a single material, the craftsmanship and artistry associated with Jade ornaments and jewellery is without comparison in other cultures. JDMIS has Best Jewellery Designing Courses in the World.

With a hardness of 6 to 6½ on the Moh’s scale, the emerald green colour Jadeite is still considered one of the most valued gems.   Early on, however another type of Jade called Nephrite was often used instead of Jadeite, because it was less hard and was therefore easier to carve.

Hundreds of years ago, Jadeite, Nephrite, Serpentine and Aventurine Quartz were all covered by one Chinese word “Yu” which today specifically refers to Jadeite and Nephrite. The name “Yu” has a broad reference and means: “noble”, “pure”, “treasure”, “jewel”, or in general, “a stone which is worth polishing”.   It was not until the 1800’s that the differences between Jadeite and Nephrite were discovered and the two materials found to be distinctly different species of minerals.  Today in China, Jade ornaments and jewellery remain the most popular gifts for couples making a mutual commitment or for those wishing for good fortune.

What Are the Most Comfortable Socks for Women?

Things You Must Know About ASET And ASET Preparation Courses: A Detailed Guide For Beginners

Why It Is Important To Get In Touch With A Feeding...

6 Life Hacks to Get Salon like Hair at Home