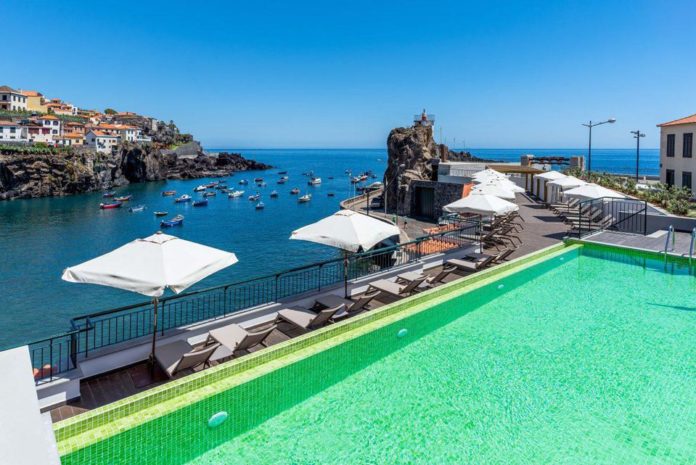 Splish, splash, skylines, scenery. Who doesn’t love a rooftop pool? Hotels certainly love them, and they’re using them to crown new developments from Nashville to New York City to Stockholm. They don’t all have city views—some look out over colorful fishing boats or high mountain peaks—but they’re all stunners.

Most visitors to this Portuguese island stay in the touristy capital of Funchal. That’s fine, but this brand-new hotel, part of the Pousadas de Portugal collection of historic and monument hotels, makes it possible to stay in the small, charming fishing village of Câmara de Lobos instead. That means the view from above is of the traditional boats in the bay, and the craggy cliffs and colorful houses behind them.

Coconut Grove hasn’t had the glamour of, say, South Beach, but it recently got a big dose of glitz when this hotel—from members of the Cipriani family—opened. Its crowning glory is a sleek pool with a panoramic view over Biscayne Bay, Brickell, Coconut Grove and South Beach. The luxury cabanas have seating for up to five people and have curtains for shade or privacy. Book the upgrade and you get a pitcher of Bellinis.

To Help More Low-Income Students Get To College, Focus On FAFSA Completion

Overcoming Struggles, Going To College, And Striving To Build A Legacy

At this new wellness-oriented hotel in the Merano Valley in the far northeast of Italy, the rooftop saltwater pool is surrounded on three sides by the manicured lawns and bright flowers of a park. The fourth is open to the sky and the vista: the craggy peaks of the Dolomite Mountains.

A long, graceful pool flanks one edge of the 9th-floor rooftop bar at this new lifestyle hotel in the Swedish capital. It’s heated, and often the sight of steam rising up from it is dreamy on its own.

This isn’t the first season for TENN on Top, the rooftop bar and pool deck at this downtown hotel. But the deck is getting a makeover, with new lounge chairs and sofas and table-top heaters. Likewise, chef Andrew Rodriguez’s menu of specialty cocktails and bites will see some new additions.

The One Barcelona H10 Hotels

The infinity pool at this new hotel is the anchor of a large terrace that has an extensive display of art and design pieces in the summer. Those are very nice, but they have very little chance of seriously competing with the city views over La Sagrada Família, La Pedrera (another Gaudí masterpiece) and the Torre Glòries from Jean Nouvel. The decadent bar menu includes an avocado roll stuffed with blue lobster and coconut sauce, and octopus with Spanish wrinkled potatoes and “mojo picón’ sauce.

With its second season just getting under way, the rooftop here is an urban oasis with cabanas, daybeds, gourmet snacks and creative cocktails. It has upped the ante on the recently trendy frosé—the Coco Frosé adds coconut to the slushy wine. The pool, with its views over Manhattan, and of the crowd on the rooftop, is a tempting spot to spend a summer afternoon.

WhatsApp May Roll Out ‘Disappearing Chats’ Feature: Here’s How It Will Work

Who’s The Face Behind FaceApp? Meet The Rich Russian Who Built The Wildly Viral...