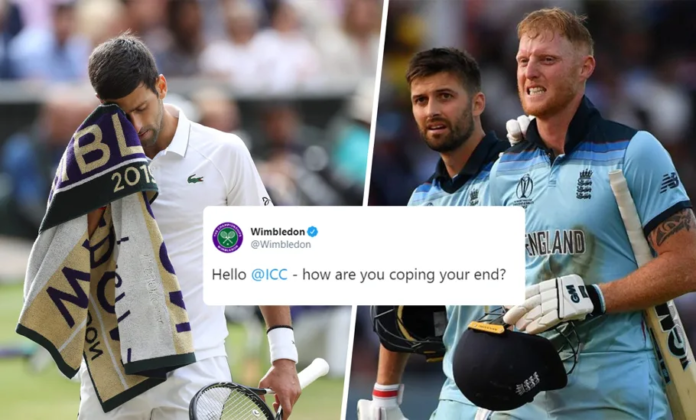 Sunday was one of those days we’ll probably be talking about for many years to come. Two of the biggest sporting events took place simultaneously and gave spectators the most eventful matches in the history of sports. On one hand, we had the ICC Cricket World Cup finals match between England and New Zealand and on the other, we had the Wimbledon’s finals with Roger Federer and Novak Djokovic. Both events had eyes glued to TV screens all over the world. Picture a million tennis and cricket fans rooting for their favourite players at the same time. Some were even juggling between the two events. It was exhilarating and most fans are still reeling from the finales. And let’s face it, last night was straight up stressful.

Sensing the gravity of the situation and the global impact of Wimbledon and Cricket World Cup finals, ICC and Wimbledon stopped for a minute to check up on each other. Wimbledon shifted focus from the grass court to see how things are going over at the cricket pitch. Here’s a Twitter chat representation of every fan ever on Sunday:

Both matches were excruciatingly long and had spectators on the edge of their seats. Wimbledon had two amazing tennis rivals going against each other. In a crazy turn of events with three tie-breaks, Novak Djokovic won the fifth Wimbledon title against Roger Federer. It was astonishing, to say the least. The ICC Cricket Worldcup was even more eventful with the first ODI match heading into Super Over. History was made in men’s cricket with England winning their first cricket World Cup. Bamboozlement was a common feeling in the world of tennis and cricket. And it was a shared universal feeling, so much that the event holders had to just as much trouble keeping up as we did. On a serious note though, what are we going to do in the days following the finals?

Fans will need a lot of time to cope with everything that went down on Sunday processing happenings that have forever changed the history of world tennis and cricket. While you’re on that impossible mission of getting over the weekend, check out some wholesome post-match reactions.