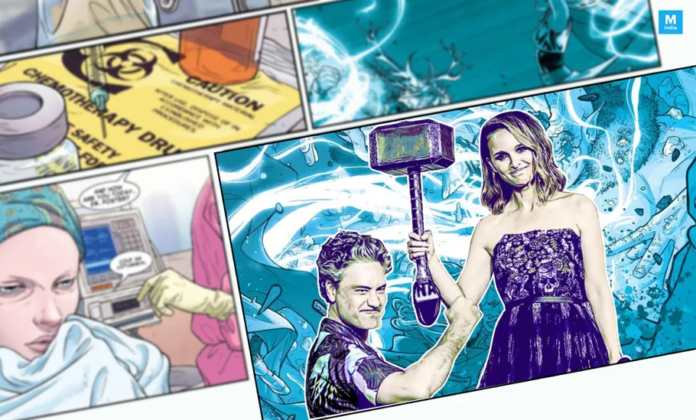 San Diego Comic-Con set the stage for tonnes of Marvel Cinematic Universe Phase 4 titles. The roof of Hall H resounded when Taika Waititi took to the stage with Natalie Portman, Chris Hemsworth and Tessa Thompson to announce Natalie Portman as the new Thor in Thor: Love and Thunder. This came as a major surprise to MCU fans who last saw the actress in Thor: Dark World, the second film of the franchise. Her return to the MCU is full of promise as The Mighty Thor. Thor: Ragnarok, the third film chapter was transformed with Taika Waititi’s direction and now, it’s all set to be forever changed with a new character taking charge.

For the longest time, it was presumed that Natalie Portman wouldn’t return to the Marvel Cinematic Universe. Avengers: Endgame changed a lot about the filmverse and featured a surprise appearance of Natalie Portman’s Jane Foster when Thor zips back into the past in the film. Even then, viewers didn’t think much of it. That, it seems was the biggest Easter egg we failed to decipher as a fandom. Phase 4 will see Jane Foster pick up the hammer and take on Mighty Thor. While it’s amazing news, something still didn’t add up. How and when did Natalie Portman sign up for this?

SEE ALSO: Natalie Portman’s Mighty Thor Is All Kinds Of Perfection In This ‘Thor: Love And Thunder ‘ Fan-Made Poster

Up until now, we had no idea that Ragnarok could have a sequel but, Marvel boss Kevin Feige spilt the beans, that the idea, in fact, was in the works for a while. It took one meeting with Taika Waititi and one particular Thor comic run to convince Natalie Portman to pick up the hammer and get jacked for the role of Thor. Jason Aaron and Russell Dauterman’s comic run ‘The Mighty Thor’ is the basically the reason we’re getting this movie. In the comics series, Thor is out of the picture and the hero who takes up the mantel is Jane Foster. Mighty Thor is a comic Taika Waititi read often on the sets of Thor: Ragnarok and picking up that story arc for a fourth Thor film wasn’t such a stretch after all stated Kevin Feige in a chat with CNN.

“We love the story — it’s one of the best comic runs recently,”…”[Director Taika Waitit] would flip through and read that run while he was doing Ragnarok. And I think when he agreed to come back and do another Thor, he was like, ‘How do we–?’ This is a very big movie that’ll be folding in a lot of elements. That is a huge important part of it. He pitched it to us, and we were totally in. We loved it. We’d been in touch with Natalie. She’s part of the MCU family and we put she and Taika together. It took one meeting and she agreed to do it.”

Taika cleared the air on the character’s name recently and appealed to the fandom to stop referring to Natalie’s Thor as ‘Female Thor’. Even in the comics, Jane Foster is never ever referred to as lady Thor. She is just Thor! Your new God of Thunder. This gives us our biggest clue yet. We’re getting a goddess of thunder who will be featured in what could be the bleakest MCU story. Confused? Allow the comics to dictate your understanding of the new superhero.

‘The Mighty Thor’ comics chronicle Jane Foster’s time defending Asgard. Her character arc progress in the most beautiful yet painful way as she deals with intergalactic conflict, an irked Odin and a tonne of backlash for replacing Thor. Thor, in these comic book pages, has been rendered unworthy of wielding Mjolnir as he pummels deeper into depression and is only referred to as Odinson. Jane, in the meantime, is called upon by the hammer that deems her worthy. Thor is out of the picture in these comics and it is in desperate, dark times that we see Mighty Thor step up to the role.

Jane Foster won’t just be fighting against impossibly large threats, but will also be fighting cancer. The character gets diagnosed with breast cancer before she’s deemed worthy by Mjolnir. She is put on chemotherapy and her physical state is constantly deteriorating. When she weilds Mjolnir and transforms into Thor, she is powerful but, doing so purges all the toxins in her body, even the cancer-fighting kind. Her chances of recovery get so slim that Doctor Strange has to warn her that transforming into Thor might just kill her.

The comics, in Jane’s arc chronicle the truth about cancer in horrific details. This is a story Marvel fans cannot picture being told in the MCU, at least not in Phase 3. But, Phase 4 is an entirely new playing ground. Anything can happen going forward and the major changes are proof of that unpredictability. ‘The Mighty Thor’ storyline also opens up the possibility of mega villains like Dark Elf Malekith and Mangog joining the MCU. We already have Valkyrie as a key ally and we can’t wait to see what other avenues rise out of it.

‘The Mighty Thor’ comic run includes five volumes: ‘Thunder In Her Veins’, ‘Lords of Midgard’, ‘The Asgard/Shi’ar War’, ‘The War Thor’ and ‘The Death of The Mighty Thor’. The film will pick elements from any of these brilliant comic storylines.

Better Therapies For TB Are Here, But They Will Not Deliver...

A New Twist to the Beauty Bias

Taylor Swift Is The World’s Highest-Paid Celebrity With $185 Million In...