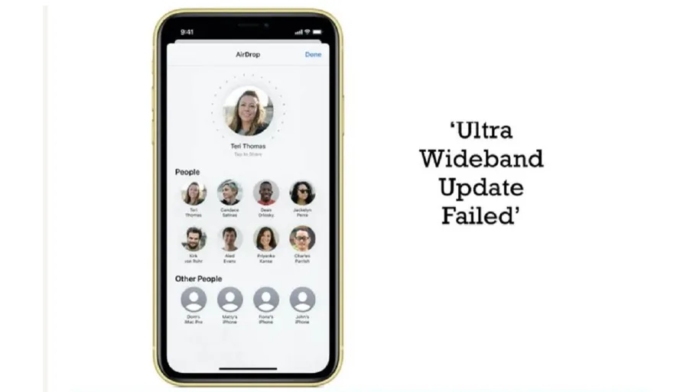 It seems like Apple’s new updates to fix previous bugs are not going to stop giving birth to other bugs anytime soon. After updating to iOS 13.1.3 and iOS 13.2 Beta 3, some users have taken to the internet to report how the new updates are causing their spanking new iPhone 11s an ‘Ultra Wideband Update Failed’ error.

Forums across the internet have received inputs from users after they updated either their iPhone 11, iPhone 11 Pro or the iPhone 11 Pro Max (the only iPhones to have the U1 Ultra Wideband Chip). The update shows up a dialogue box that is titled as ‘Ultra Wideband Update Failed’ and further informs users that their phone cannot use ultra wideband until it has been updated. While this might not seem like a huge problem at first, it’s important to know that the iPhone 11 series uses this chip for sharing files via AirDrop. Hence, for users who rely on AirDrop to share feels between their iPhones or even to their MacBooks, this can be a case of concern.

Some users have also reported on Apple Forums that this error has also shown up when they update to iOS 13.1.1 and iOS 13.1.2. Thankfully, this doesn’t seem to be a widespread issue and isn’t affecting all users. In fact, I have the iOS 13.2 Beta 3 update installed on my iPhone 11 and haven’t faced this issue for myself.

While Apple hasn’t officially acknowledged this or come up with a fix yet some users have managed to get rid of it by putting their iPhones in DFU mode and restoring their iOS firmware. Users for whom this doesn’t seem to work are getting their iPhones replaced indicating that the update might be causing hardware failure. If you’re one of those affected, getting in touch with an Apple Authorized Service Provider to get the best possible solution.

SEE ALSO: iOS 13 Is Already On More Than Half Of Existing iPhones Across The World, Reveals Apple

We Work is Shutting Down a Restaurant Co-Working Startup it Acquired...