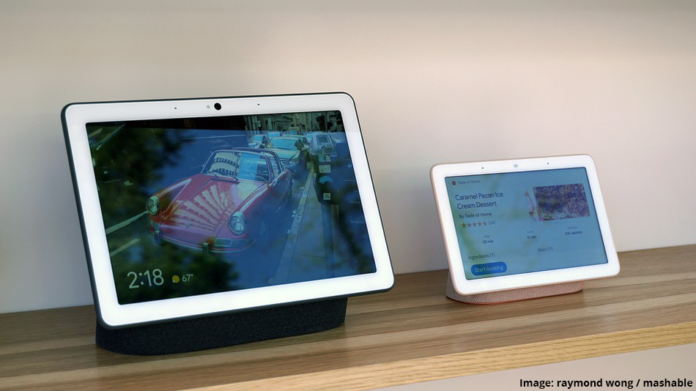 More than five years after acquiring Nest, Google is officially bringing all of its smart home products together, merging Google Home and Nest into a single division.

Their first act: the Google Nest Hub Max, a $229 smart display with a built-in speaker and camera with face recognition abilities that goes on sale later this summer. Google unveiled the latest addition to its smart speaker lineup onstage at its I/O developer conference.

At first glance, the device is essentially a larger version of Google’s Home Hub (now called the Nest Hub) with one major difference: it has a camera, the first of Google’s smart speakers to include one. It’s a significant change for Google, and one made possible by the decision to formally bring the Nest and Google Home teams together. (The camera on the Hub Max was designed by Nest engineers.)

With that change comes a few few tricks not possible on any other Google Home speaker.

The most interesting is a new feature called Face Match. Similar to Voice Match, which lets you train Google to recognize multiple voices in the same household, Face Match allows it to detect and recognize faces. When enabled, the feature (which is optional) allows you to get proactive notifications based on information tied to your Google account. For example, you may see appointments from you calendar or an alert about traffic conditions in the morning.

Because Face Match supports up to six different people in the same house, these reminders will be personalized based on who is looking at the device.

It’s work that started years ago with Google Now, the company’s first attempt at personalized, proactive notifications. Now, by incorporating an in-home display and face recognition, these notifications could make you feel like you have an actual assistant. But putting a facial recognition device in your home raises all kinds of questions about privacy and just how deeply we want to embed one of the world’s largest advertising companies into our lives.

In an effort to allay some of these concerns, Google says it ensures that none of the face recognition features rely on the cloud, instead happening on the device itself in order to ensure that information is kept private.

“It happens entirely on device, nothing is sent to the cloud,” says Google’s product lead for smart displays, Ashton Udall. “It’s able to actually process the frame, analyze it and delete it all within a fraction of a second.” He also notes that Face Match is optional, and that there is a mute switch on the back of the speaker that physically disables both the onboard camera and microphone.

In any case, the camera on the Nest Hub Max does more than just recognize your face. As you might expect, you can also use it for video calls (via Google Duo). The camera, which has a 127-degree field of view, can track your movements as you walk around and will automatically shift and zoom to keep you in the frame, similar to the functionality of the camera on Facebook’s Portal speakers.

Another handy feature: the camera enables gesture controls for media playback. Looking at the camera and holding up your hand lets you pause/play your music or videos. It’s a small feature, but one that could easily end up being one of the most useful. It’s faster and easier that shouting an “Okay Google,” command, and less disruptive to anyone around you.

Finally, the camera can also double as in-home security camera. When set up, you can check the Hub Max camera while you’re away from home, the way you’d use a Nest security camera. This footage isn’t saved or stored by default, but if you have a Nest Aware subscription, you can opt to hang onto it.

Whether or not all that is enough to sell people on a camera-enabled speaker is another matter. Though security camera functionality and gesture controls are nice additions, people have more privacy concerns surrounding smart speakers. Nest, at least, has been making well-received smart camera for years, which could give Google a leg up on competitors with a more questionable record on privacy.

WATCH: Get Google Assistant to talk in John Legend’s voice

Better Therapies For TB Are Here, But They Will Not Deliver Themselves