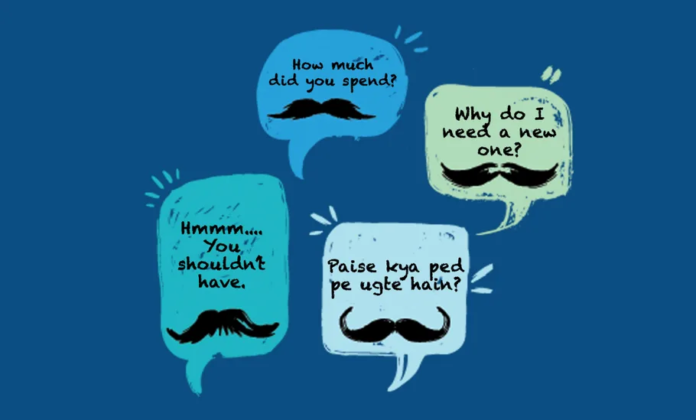 If you’re here to argue with me on this, claiming that you’re the best son/daughter ever who always manages to impress your dad/daddy/father/papa with the perfect gift, then you’re the exception, not the rule. Because the perfect gift doesn’t exist. Apne baap ko mat sikha!

The first time I attempted to get my father something was when I was in Harrods, London, on a trip that he had paid for and sent me. I used his money to buy him a souvenir pen from the landmark store. I landed on home soil on his birthday eve and proudly presented him the gift. He was happy, and he used the pen until the pen had no use left in it. I could flex about it all I wanted, but the irony that I had just spent his money to gift him something didn’t escape me.

Junior year of college, my BFF was buying a fancy French-label wallet for her dad for father’s day. She looked at me, standing there expressionless, wondering why I wasn’t spending my dad-given allowance on a gift for my pops too. But I felt zero FOMO or guilt. I hadn’t forgotten Harrods.

And because by then, I had learnt an important life lesson about dads. Fathers were providers. They’d provide every comfort, every happiness in the world to you. But if you even so much as attempted to do the same for them, they’d only accept it PROVIDED it passed the Dad Test. Which was impossible.

Take the wallet, for example. Say, I gave in, and brought it for my dad. But before I could feel good about getting my dad a gift, the wallet would have to undergo the strictest test on the planet. And you should know, it gets tougher if your dad’s superstitious like mine is.

Is the wallet the right colour (according to the astrologer)? Does it have enough slots to fit all the photos of gods AND his credit cards? Does it fold just right so it can fit in his trouser pocket? Too big? Too small?

That was just the first round of scrutiny. Wait till he asks you how much you spent on it. The number could be as low as 50 bucks, and then depending on whether you earn or not, the next test question will be formulated—Where did you get so much money from? Or, why are you spending your salary on all this?

The final round is a death match. Because here, you’re pitted against his old wallet, one that would have been with him perhaps even longer than you have. It will be this old, rugged, frayed thing, colour faded and worn out. But don’t underestimate the hold it has on your father. You’d try and make him see the old wallet for what it is—something that needs to be replaced. You’ll recite every amazing feature of the new one—anti-theft, looks great, has enough slots, even mom likes it!

But ultimately, guess who’ll win? The shiny new wallet will be accepted, and he’ll love you for it. But be ready to put in hours and hours of convincing and reminding him to start using it.

All my life, this Dad Test has applied to everything that we have brought for him. I still remember leaving for this trip, and asking my dad what he wanted. He pulled a Dumbledore on me and asked for a certain type of socks. I did get him those, but he wore them once and declared that they weren’t for him. My mom uses them now, just like my brother uses the watch we gave him for his birthday, and I use the fancy pens he gets as corporate gifts on Diwali. Thankfully, we convinced him to change his office bag, and only because the older one was declared irreparable. It has to absolutely be the last resort.

Sometimes I couldn’t help but wonder, who are these people who plan surprise holidays and parties for their fathers? How are their dads compliant and not throwing tantrums? They’d totally amaze me. I thought it was just my dad, and I who were weirdos.

But it didn’t take long for the epiphany that this was a common occurrence. Believe me, I asked around before writing this. Dads everywhere are the same. They don’t like change or new fancy things. Even my grandfather, bless his soul, was the same with his son. I’d derive this gleeful pleasure telling my dad “Now you know how we feel” every time my grandpa spectacularly (and hilariously) trashed dad’s efforts at doing something nice for him. I guess, it’s just how dads are built.

You’ll say, it’s the thought that counts. But even greeting cards are a no-no. My dad’s super emotional and has cried in front of me too, but hell if a greeting card would do the trick. I even took him out to dinner for Father’s Day to a new place, and he found a way to complain about the servers, which is another quintessential Dad thing. The next time, I took him to his usual jaunt. But because he was a regular, we ended up getting a huge discount. Dad: 1, Me: 0.5.

Occasionally though, I’d strike gold with a nice bottle of his favourite scotch or great food. But it felt too easy, too not-fancy. But wait, was that the trick? Being super basic?

You know they (Lord Varys on Game of Thrones) say, wisdom often comes from the mouth of babes (babies, not babezzz). And I realised, all these grown-up gift ideas were simply sh*t. Our dads don’t want us spending money on them. They can do it themselves. They’ve decided it’s ‘their job’ and no manner of modernisation or woke lectures will change that. All they want is for us, their children, to keep believing in them as our heroes.

And no matter how old or incapacitated they become, they never want to lose that feeling. If you can give them that, along with a warm hug and an “I love you 3000” once in a while, then it’s the baap of all gifts for them! Cliché, but then so are dad jokes!

The Biggest Lie We Tell on the Internet Is Ourselves!